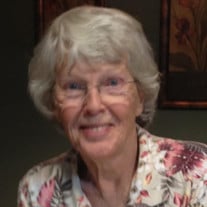 Betty Ashley, 84, of Florence, AL, passed away on January 29, 2015, in LaPlace, LA. Betty was born in Florence to Oliver and Vera Furgerson on April 30, 1930. She attended school in Florence and after marrying, moved to Louisiana where she raised three daughters, obtained a Licensed Practical Nurse degree and worked at the Twin Oaks Nursing Home in LaPlace for a number of years before retiring. She enjoyed crafts, bowling, playing cards, dominoes, reading, traveling and the Alabama Crimson Tide football team (much to the dismay of her son-in-law, Kevin). Betty is preceded in death by her husband, Ralph Ashley; an infant son; parents, Oliver and Vera Furgerson; three brothers, Andrew, Billy and Henry Furgerson; and a grandson, Jonathan Gregory. Betty is survived by her three daughters, Sandra Kuykendall of Baton Rouge, Louisiana, Ramona Gregory of Knoxville, Tennessee, and Donna Madere (Kevin) of LaPlace; grandchildren Daniel Madere, Andrew and Kip Kuykendall, and JoLynn Smith (Aaron); great-grandchildren Jaxson and Kennedy Smith and Grant and Ryder Gregory; sister-in-law, Margaret Furgerson and numerous nieces and nephews. The family wishes to extend their gratitude to the Lakeside Hospice for their support in Betty’s final days. Special thanks to Maria, Ann, and Teri. There will be a memorial service held for family and friends in LaPlace, LA, on Saturday, February 7, 2015, at the Madere residence, 401 Aycock Drive, from 2:00 p.m. until 4:00 p.m. Interment will be at Greenview Cemetery in Florence, AL on February 10, 2015. Arrangements by Millet-Guidry Funeral Home. In lieu of flowers, please consider a donation in her memory to the American Cancer Society, P.O. Box 22718, Oklahoma City, OK, 73123-1718. To view or sign the online guest book, please visit www.milletguidry.com

Betty Ashley, 84, of Florence, AL, passed away on January 29, 2015, in LaPlace, LA. Betty was born in Florence to Oliver and Vera Furgerson on April 30, 1930. She attended school in Florence and after marrying, moved to Louisiana where she... View Obituary & Service Information

The family of Betty Jo Ashley created this Life Tributes page to make it easy to share your memories.