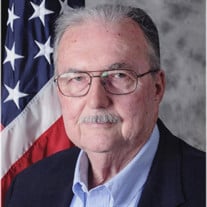 Bryan F. Hymel passed away on December 4, 2020 after a 3 year battle with Merkel Cell Carcinoma at the age of 80. He was a resident of Reserve and LaPlace, Louisiana. He was born to Rowley L. Hymel and Mabel Brignac Hymel. Bryan was a 1958 graduate of Leon Godchaux High School in Reserve, Louisiana. He married Marie Etta Vicknair of LaPlace, LA on October 6, 1962. Bryan served in the Navy assigned to Naval Air Squadron VS821. He was stationed in Maryland and received an honorable discharge in 1964. Bryan retired from Kaiser Aluminum in Gramercy, LA as an instrumentation supervisor with 30 years of service. Prior to Kaiser he was employed at Dupont Chemical in Reserve, LA. Bryan was involved in Law Enforcement for 38 years. He was elected St. John the Baptist Parish District 7 Constable and served for 30 years. Bryan was a Sheriff’s Office Auxiliary Captain and volunteered with the St. John Sheriff’s Search and Rescue Team. During the 1970's he volunteered with the St. John Parish Fire Department. Bryan was a Louisiana Licensed Private Investigator. Bryan was a 2009 graduate of the FBI Citizens Academy, serving as Sgt. at Arms in 2011 and Elected President in 2012. Bryan was a loving husband, father and grandfather who will be deeply missed. He was treasured by his family and friends. Bryan had a passion for cooking and volunteered his time to many fundraisers and charities including the Andouille Festival, Riverland’s Golf & Country Club, a yearly fundraiser in Missouri and helping his dad Rowley before his passing in 1978. Bryan was a loving and giving person with a big heart. He was always there when anyone asked for help. He never met a stranger and was able to start or join in a conversation with anyone. Bryan loved to make people laugh and had a terrific memory. He loved researching especially when it came to his passion of vehicles. Another passion was riding his Goldwing motorcycle and the joy that came with the many trips taken on it. Bryan never wanted to reach the age of 80, but God had different plans for him. Bryan is survived by his beloved wife, Marie Etta Vicknair Hymel, son Todd Hymel, daughter Angela Andry and her husband Jeff Andry as well as grandchildren, Dustin Hymel, Jeremy Hymel, Blake Hymel, Christopher Andry and Nicole Andry. Surviving siblings include Jean Gendron and Jimmy Hymel. He is predeceased by his parents, his sister Katherine “Teena” Hymel and brother Rowley L. “Sonny” Hymel, Jr. Due to Covid 19 pandemic restrictions the family held a small intimate service on December 7, 2020. Services were arranged by Millet-Guidry Funeral Home, 2806 W. Airline Hwy., LaPlace, LA 70068. Interment followed at St. John Memorial Gardens Cemetery in LaPlace, LA. If you wish to make a donation in Bryan’s name, it can be made to MerkelCell.org , the American Cancer Society, Masses at a church of your choice or any charity of your choice. To view or sign the online guest book, please visit www.milletguidry.com

Bryan F. Hymel passed away on December 4, 2020 after a 3 year battle with Merkel Cell Carcinoma at the age of 80. He was a resident of Reserve and LaPlace, Louisiana. He was born to Rowley L. Hymel and Mabel Brignac Hymel. Bryan was a 1958... View Obituary & Service Information

The family of Bryan F. Hymel created this Life Tributes page to make it easy to share your memories.