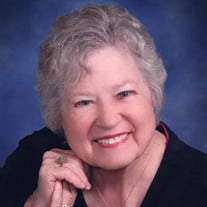 Constance “Connie” Murphy Hatfield, 84, a long-time resident of LaPlace and Norco, LA, passed away Saturday, March 16, 2019. Constance Janet Joiner was born July 30, 1934 in Cotton, GA, the daughter of Hershel and Eloise Joiner. She was a graduate of Andrew College in Cuthbert, GA, class of 1953 and Southeastern Louisiana University in Hammond, LA, class of 1973 & 1974 where she earned both her Bachelor of Arts and Master’s degrees in Early Childhood Education. She married Norton Hendry Murphy in 1953 and they made their home in many places starting in Mount Pleasant, GA, Murfreesboro, TN, Atlanta, GA, Panama City, FL, and then settled in LaPlace, LA in 1969. After Norton passed in 1989, Connie married Thomas “Tommy” B. Hatfield of Norco, LA, in 1993. She was a member of the First United Methodist Church in LaPlace. Connie taught Kindergarten at LaPlace Elementary for 20 years from 1975 until her retirement in 1995 where she was beloved by both parents and students alike. She enjoyed traveling and visited most of the 50 states and many European countries over the years. Connie was grounded in her faith and devotion in the United Methodist Church, which carried her through many rough and difficult times. Devoted to her family, she loved hosting large family gatherings. She was truly blessed and had a wonderful smile that could light up a room. Survivors include her husband, Tommy Hatfield of Norco, LA; her three children, Norton “Tony” Murphy Jr. and his wife, Kushmala, of LaPlace, LA, Teresa “Terri” Murphy of LaPlace, LA, and Kelly Murphy Gifford and her husband, Gerald, of Cumming, GA; two sisters June Green of Shelby, NC, and Gloria Murphy of Bainbridge, GA; and seven grandchildren, Misty and Charles Milioto, Rafferty and Rylie Gifford, Uttra, Gansham and Somraj Ri and seven great grandchildren who brought her much joy throughout the years. She will be missed by Tommy’s children Tom, Jim, Glen, Dan and Bob Hatfield along with their spouses, children, grandchildren and great grandchildren. In addition to her parents, Connie was preceded in death by her first husband, Norton. H. Murphy, Sr. and sister, Nancy Hickey of Camilla, GA. The visitation will be held at Millet Guidry Funeral Home, 2806 W. Airline Hwy., LaPlace on Wednesday, March 20, 2019 from 6:00 p.m. to 9:00 p.m. and at First United Methodist Church, 301 Bamboo Rd., LaPlace on Thursday, March 21, 2019 from 11:00 a.m. to 1:00 p.m. with the service to immediately follow at 1:00 p.m. A visitation will be held at Sutton Chapel United Methodist Church, 3942 Vada Rd. (Hwy 97), Bainbridge, GA on Saturday, March 23, 2019 from 10:00 a.m. to 11:00 a.m. with the Graveside Service to immediately follow in the Sutton Chapel Cemetery. Please consider a donation in her memory to the National Kidney Foundation, 8200 Hampson St, Suite 425, New Orleans, LA 70118 or the American Diabetes Association, P. O. Box 15829, Arlington, VA 22215.

The family of Constance "Connie" Murphy Hatfield created this Life Tributes page to make it easy to share your memories.