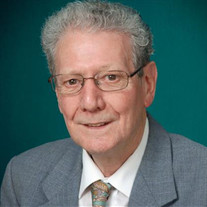 Donald Raymond Loupe, Sr. passed away on Monday, July 10, 2017 at the age of 79. He was a native and lifelong resident of Reserve, LA. He retired from Freeport McMoRan and was a 4th degree Knight of the Knights of Columbus Council No. 2436... View Obituary & Service Information

The family of Donald R. Loupe Sr. created this Life Tributes page to make it easy to share your memories.