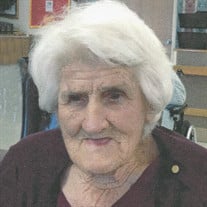 Dora Laiche Abbate grew her beautiful wings on November 13, 2014. She was 89, a native of Garyville and a resident of LaPlace. Beloved wife of the late Frank Abbate, Sr. Mother of Michael Abbate, Frank Abbate, Joseph Abbate, Peter Abbate, Marguerite Weber, Ursin Abbate, Frances Blount and the late Salvador Abbate, Baby Marguerite and Baby Nicholas. Mother-in-law of Cathy Abbate, Bettie Abbate, Carol Oxendine, Milton Weber, Charles Blount and the late Danny Fontenot, Sr. and Connie Louque Abbate. Daughter of the late Virginia Matherne and Ursin Laiche. Sister of Morris Laiche and the late Ernest Laiche, Murphy Laiche, Irvin Laiche, Mercile Laiche Falgoust and Dorothy Laiche Ferraro. Grandmother of Michael Abbate, Jr., David Abbate, Maria Fontenot, Luke Abbate, John Abbate, Amy Abbate Singleton, Kimberly Abbate, Daryl Abbate, Rachel Abbate, Peter Abbate, Jr. Brad Abbate, Brandi Abbate, Brett Abbate, Melissa Weber, Austin Abbate, Justin Abbate, Daniel Fontenot, Jr., and Christopher Fontenot. Great-Grandmother of Anna Abbate, Lucy Abbate, Sam Abbate, Ethan Fontenot, Grayson Fontenot, Leila Abbate, Leo Abbate, Addison Abbate, Ashton Abbate, Kayla Abbate and Brett Abbate, Jr. Dora was a homemaker and she invented a new meaning to keeping a home and yard spotless. A dish, glass or cup wouldn’t hit the bottom of the sink, it was washed, dried and put back up in the cabinet. If a piece of paper was blown into the yard or a leaf hit the ground, it wasn’t there long. She is remembered for her outgoing personality. She would walk up to anyone and start talking to them like she had been friends with them for a long time. She was always smiling and joking around. She will be remembered forever for her unselfishness and always doing something for someone else. Many people and friends knew her because she reached out to people. She would be seen often walking everywhere in Norco, mostly to her sister’s, Dorothy, house. Relatives and friends are invited to attend the Funeral Mass at Ascension of Our Lord Catholic Church, 1900 Greenwood Drive, LaPlace on Tuesday, November 18, 2014 at 11:00 a.m. Visitation will be held in the church on Monday from 7:00 p.m. until 9:00 p.m. and on Tuesday from 9:00 a.m. until 11:00 a.m. Interment in St. Charles Borromeo Cemetery. Arrangements by Millet-Guidry Funeral Home.

The family of Dora Laiche Abbate created this Life Tributes page to make it easy to share your memories.