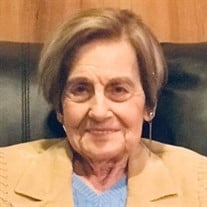 Elizabeth &#8220;Betty&#8221; Estock Manson passed away peacefully on Saturday, December 1, 2018 at the age of 86. She was a native of Nanticoke, PA and a resident of LaPlace, LA for the past 58 years. Beloved wife of the late Gilbert John... View Obituary & Service Information

The family of Elizabeth Estock Manson created this Life Tributes page to make it easy to share your memories.