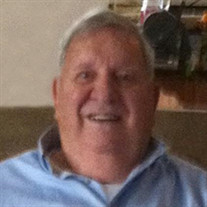 Gerard Walton Caire passed away peacefully at Touro Hospital surrounded by his family and Father Doug Brougher, Chaplain at 1:30 p.m on Monday, February 12, 2018. He was 87, native of Edgard, the 10th of twelve siblings. Son of the late Sidney J. B. Caire, Sr. and Annette Jones Caire. Brother of Adele Caire, RSCJ, Laura Ann Caire, RSCJ, Margaret Mary Caire, RSCJ all Religious of the Sacred Heart, Warren F. Caire of Edgard and the late Sidney J. B. Caire, Jr. (Marie Therese), Sybil Pedeaux (Melvin), Eloise Abadie (Sam), Vivian Berthelot (Drauzin), E. J. Caire, II (Inez), Sophie Grenier (Ray) and Geraldine Farrell (Buddy). He is also survived by 30 nieces and nephews and over 60 great-nieces and nephews. He attended grammar school in Edgard and completed High School at St. Stanislaus in Bay St. Louis. He completed 4 years at Loyola University. During those years, he was very active in Beggars Fraternity and as an alumnus continued to be an advisor. After college he spent 4 years in the U. S. Air Force after this he continued to work as an air traffic control operator while attending Loyola Law School. Upon receiving his Juris Doctor Degree, he began practicing law in Edgard for many years. He entered politics and was elected Honorable Judge, 40th Judicial District Court, Retired, St. John the Baptist Parish. After a 6 year term he became an administrative Law Judge for 6 years serving the areas of North Louisiana and Jefferson Parish. He continued a long law practice in Edgard as well as serving as managing partner for Church Place Plantation. An active member of the Knights of Columbus for many years, he was an active member of 3rd degree Council #1514 in Vacherie. He served in many offices as well as Grand Knight. He was very active in the 4th degree Archbishop Blenk Assembly #318 in Gramercy. As a Knight he was very active, attending many state conventions and contributing time, talent and financial support. For many years he enjoyed fishing but the one favorite event throughout his life was the weekly Friday meal in New Orleans with his many lawyer friends. He was a loyal parishioner of St. John the Baptist Church in Edgard. He helped open the church for daily Mass, often led the Rosary before mass and for many years gave legal counsel and service to his parish. Relatives and friends are invited to attend a Funeral Mass at St. John the Baptist Church, 2349 LA-18, Edgard, LA on Saturday, February 17, 2018 at 11:00 a.m. Visitation at the church from 9:00 a.m. until 11:00 a.m. Interment in St. John the Baptist Cemetery. In lieu of flowers, friend and relatives may honor Walton with a donation to Schools of the Sacred Heart, 1821 Academy Road, Grand Coteau, LA 70541 or to Loyola University, 7214 St. Charles Avenue, Campus Box 909, New Orleans, LA 70118. Arrangements by Millet-Guidry Funeral Home.

Gerard Walton Caire passed away peacefully at Touro Hospital surrounded by his family and Father Doug Brougher, Chaplain at 1:30 p.m on Monday, February 12, 2018. He was 87, native of Edgard, the 10th of twelve siblings. Son of the late Sidney... View Obituary & Service Information

The family of Gerard Walton Caire created this Life Tributes page to make it easy to share your memories.