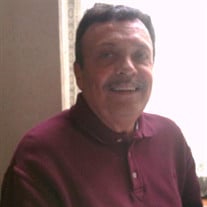 Harry “Duddy” Benedict Duhé, Jr., 72, passed away on Friday, October 18, 2019, at Our Lady of the Lake Hospital, in Baton Rouge, LA. He passed away due to complications from his heart and kidney diseases. Duddy was a native of LaPlace, LA and a long-time resident of Prairieville, LA. He was the son of Earlene (Gendron) and Harry B. Duhé, Sr. He was the devoted husband and best friend of Kathleen (Ring) Duhé, for 49 ¾ years. Duddy was the loving and caring father of Julie-Ann A. Duhé-Keating and grandfather of Darby Elise and Riley Grace Keating. He leaves a brother-in-law, Richard Ring, sisters-in-law, Mary M. Ring and Barbara C. Duhé and a nephew, Mike Duhé, who will miss him greatly. Duddy was preceded in death by his parents and three younger brothers, Ray Allen Duhé, Richard “Ricky” L. Duhé and Robert “Bobby” J. Duhé, all from LaPlace, LA. Duddy graduated from Leon Godchaux High School in 1964 and attended LSU, in Baton Rouge, LA. He served in the United States Naval Reserves from 1967 to 1973 and was honorably discharged. He was employed by BASF, in Geismar, LA for thirty-six years. Duddy was a member of St. John the Evangelist Catholic Church. He was a member of numerous horse associations and he was very passionate about his horses and all LSU sports. The funeral will be held on Saturday, October 26, 2019 at St. Joan of Arc Church, 529 W. 5th St., LaPlace, LA 70068. Visitation will be from 11:00 AM to 1:00 PM with a memorial Mass to follow. Interment will be at St. John Memorial Gardens Cemetery, 2205 W. Airline Hwy., LaPlace, LA 70068. In lieu of flowers, the family requests memorial donations to be made in Duddy’s name to one of the following organizations: Low Cost Animal Medical Center, 4300 Washington Ave., New Orleans, LA 70125 or The American Kidney Fund, 11921 Rockville Pike, Suite 300, Rockville, MD 20852. Arrangements by Millet-Guidry Funeral Home. To share memories or condolences, please visit www.milletguidry.com

Harry &#8220;Duddy&#8221; Benedict Duhé, Jr., 72, passed away on Friday, October 18, 2019, at Our Lady of the Lake Hospital, in Baton Rouge, LA. He passed away due to complications from his heart and kidney diseases. Duddy was a native of LaPlace,... View Obituary & Service Information

The family of Harry "Duddy" B. Duhe Jr. created this Life Tributes page to make it easy to share your memories.