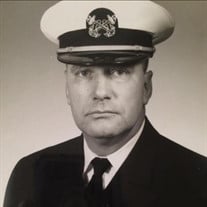 Harry A. “Ney Ney” Madere, 92, passed away on April 23, 2021. He was born on March 25th, 1929 in LaPlace, LA to Lawrence Joseph and Denise (Vicknair) Madere Sr. Harry was a decorated veteran who served 22 years in the Armed Forces after graduating from Leon Godchaux High School. During his career in the U.S. Navy, Harry married Maureen Griffiths whom he met while on duty in Cheltenham, England. He achieved the rank of Chief Warrant Officer 2 before retiring in 1971 and returning to his native hometown. He was also the last surviving charter member of the LaPlace chapter of American Legion Post 383. He spent his later years in Chauvin, LA where he enjoyed fishing, shrimping, gardening, cooking, and genealogy. He spent many years sharing his passion for the outdoors with his children and grandchildren. Harry was preceded in death by his parents, Lawrence and Denise Madere, and brother Lawrence “Pickle” Madere. He is survived by his wife of 66 years, Maureen, his children Michael Lee (Ana) Madere of Gonzales, Vicky (Bob) DeCristofaro of Seneca, SC, Tracey (Mark) Foley of Tomball, TX and Scott Madere of LaPlace, his brother Kenneth (Linda) Madere of Reserve, his grandchildren James (Kylee) Madere of Ypsilanti, MI, Bobby Madere of Baton Rouge, Alex Madere of Gonzales, Eric (Molly) DeCristofaro of Glenview, IL, Ashley (Kevin) Ekman of Greer, SC, Austin Foley of Tomball, TX, Bridgette Madere of Baton Rouge, Josh Madere of Walker, and Heather (Devin) Clift of LaPlace, five great-grandchildren and a host of nieces and nephews. Visitation is from 12pm – 2pm 28 April 2021 followed by a memorial service at 2pm and will be held at Millet Guidry Funeral Home, 2806 W. Airline Hwy, LaPlace. Interment will follow at St. John Memorial Gardens, 2205 West Airline Hwy, LaPlace. Due to current CDC mandates, use of personal protective masks will be required for visitation and the memorial service. Those remotely symptomatic of COVID-19 are politely asked not to attend. Many thanks to the kind and compassionate staff and volunteers at The Hospice of Baton Rouge’s Butterfly Wing and the Memory Care unit at Francois Bend Assisted Living. In lieu of flowers, please donate to The Hospice of Baton Rouge (www.hospicebr.org) or the Alzheimer’s Association (www.alz.org) or a charity of your choice. To share memories or condolences please visit www.milletguidry.com

The family of Harry A. "Ney Ney" Madere created this Life Tributes page to make it easy to share your memories.