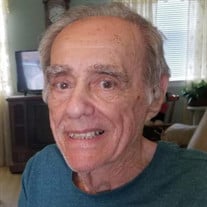 Henry Joseph Sanchez passed away surrounded by his loving family at home on Wednesday, October 7, 2020 at the age of 91. He was a native of New Orleans, LA and a resident of LaPlace, LA. Henry attended Delgado Community College in New Orleans and earned a degree as a machinist in the early 50's. He served briefly in the U.S. Air Force in the middle fifties. While stationed in Denver, CO, he met the love of his life his future wife, Emily. He got an early honorable discharge from the Air Force to return home to take over his father’s business due to his father’s failing health. He later became an automotive mechanics teacher, teaching at 3 different schools, where he retired after 37 years from River Parishes Vo-Tech. After retirement he Arbitrated for Chrysler Corp and also worked on small engines at Vahn’s. As a father he always had time for camping, trips to the beach, water skiing and fishing. He attended St. Joan of Arc Church and was active in the Knights of Columbus in the 70's and 80's. Beloved husband of the late Emily Weber Sanchez. Loving father of Marilyn Marie Summerhalter (Donald), Neil Andrew Sanchez (Bobbi) and the late Kathryn Joan Sanchez and Cynthia Denise “Cindy” Jenkins (Terry). Grandfather of Mark Anthony Babin (Stephanie), Daniel Paul Babin (Amanda), and Sarah Marie Shinpoch (Alex). Great Grandfather of Emma Marie Babin, the joy of his life. Son of the late Marie Malarcher Sanchez and Joseph J. Sanchez. Brother of Carol Smith, Joe Sanchez, Jerry Sanchez and the late Margie Smith, Joyce Steadman and Jimmy Sanchez. Also survived by many nieces and nephews. The family would like to express a special thanks to his caregivers, Alissa, Lynelle and Ariel of Passages Hospice. Relatives and friends are invited to attend the Visitation and Funeral Mass at Millet-Guidry Funeral Home, 2806 W. Airline Hwy, LaPlace on Monday, October 12, 2020 from 9:00 a.m. to 11:30 a.m. with the Funeral Mass to immediately follow. Internment to follow at Westlawn Cemetery, Gretna. To share memories or condolences, please visit www.milletguidry.com

Henry Joseph Sanchez passed away surrounded by his loving family at home on Wednesday, October 7, 2020 at the age of 91. He was a native of New Orleans, LA and a resident of LaPlace, LA. Henry attended Delgado Community College in New Orleans... View Obituary & Service Information

The family of Henry Joseph Sanchez created this Life Tributes page to make it easy to share your memories.

Henry Joseph Sanchez passed away surrounded by his loving family...