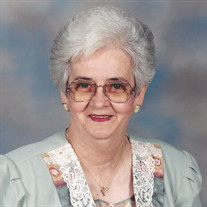 Iris Salzer Waguespack passed away peacefully on Saturday, October 7, 2017 at her daughter’s (Iris) home after years of suffering with dementia. She was 84 years old, a native of Metairie and resident of LaPlace for 68 years. She was preceded in death by her husband, Francis G. Waguespack, Sr.; her parents, Alfred and Mabel McKneely Salzer; siblings, Rita Rome, Rosemary Decker, Alfred “Sonny” Salzer, Jr. and Michael Salzer; and a special friend, Charles Cascio. Beloved mother of Stephen Waguespack (Debbie), Iris Simon (Perry), Francis Waguespack, Jr. (Stephanie) and Colleen Simon (Lowell). Grandmother of Tiffaney Harrison (Ben), Stephen Waguespack, Jr. (Vera), Brooke White (Mike), Candace Haydell (C.J.), Sarah Flinn (Jon), Jason Waguespack (Alana), Joshua Simon (Leah) and Ashley Paydo (Rob). Sister of Carol Beckleheimer, Jackie Hymel (Cline), Sherian Solomon (Bob) and Adrian Bettevy (David). She is also survived by 17 great grandchildren, 3 great great grandchildren and her companion of 18 years, Martin Muller and his daughter Toni Hernandez. Iris was a volunteer at River Parishes Hospital for over 25 years and made gifts for all patients who were in the hospital on holidays. Caretaker of mothers of Peter Finney, sports writer for the Times Picayune and Dr. S.J. St. Martin. She spent many hours crocheting, quilting, gardening, sewing, reading, crafting and writing letters to over 30 pen pals. She fought her battle with dementia for several years until she could fight no longer. She is now at peace in God’s hands. We would like to express our thanks to Dr. Colin Bailey, Dr. William Johnson and Dr. Terrence D’Souza for the great care they gave her over many years. We would also like to express a special thank you to St. Catherine’s Hospice for all the care and support given to our family during this difficult time. Without their help, it would not have been possible for her to die peacefully at home with her family surrounding her. Especially Sharon, Ashley, Bonnie, Allison, Elandra and Danieka who treated our family like their family. Relatives and friends are invited to attend the visitation at Millet-Guidry Funeral Home, 2806 W. Airline Hwy., LaPlace on Wednesday, October 11, 2017 from 6:00 p.m. to 9:00 p.m. and a visitation on Thursday, October 12, 2017 at St. Joan of Arc Catholic Church, 529 W. 5th St. Laplace from 9:30 a.m. to 11:30 a.m. followed by the Funeral Mass at 11:30 a.m. Interment will follow in St. John Memorial Gardens Cemetery. In lieu of flowers, donations in her memory may be made to the Alzheimer’s Association, 2605 River Rd., New Orleans, LA 70121.

Iris Salzer Waguespack passed away peacefully on Saturday, October 7, 2017 at her daughter&#8217;s (Iris) home after years of suffering with dementia. She was 84 years old, a native of Metairie and resident of LaPlace for 68 years. She was... View Obituary & Service Information

The family of Iris Salzer Waguespack created this Life Tributes page to make it easy to share your memories.