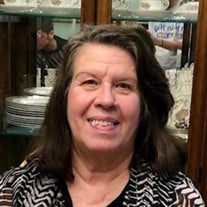 Janet Jane Modglin of Reserve, LA, passed away on Wednesday, March 17, 2021, at 77 years old. She was born on September 30, 1943, in Reserve, Louisiana. She is preceded in death by her parents, James and Regina Lasseigne. She is survived by three siblings - two brothers, Jimmy and Frenchie, and a younger sister, Magda. Janet attended Leon Godchaux High School, class of 1961. She then married Joseph Albert Rodriguez (deceased). She has two children, John Albert and Joey Adam Rodriguez, wife Sylvia. Her second marriage was to Joseph Nelson Modglin. Janet worked for 30 years at Klein Independent School District as a secretary retiring in February. She was blessed with six grandchildren - Hunter John Rodriguez, Mallory O’Neil Rodriguez, Cole Joseph Rodriguez, Meredith Emily Rodriguez, Lee Hudson Rodriguez and Allyrose Hope Rodriguez. Janet was loving, kind-hearted, caring and thoughtful. But one of Janet’s greatest attributes was her selflessness. Always putting others wants and needs above her own. Whether it be raising two boys by herself, watching grandchildren on the weekend, or caring for her husband in his final years, others always came before her. No matter the situation, Janet made it a point that everyone needs were met before her own. Besides watching after others, Janet loved spending time with family. When her grandchildren were younger, weekends were spent watching them play sports. From baseball tournaments, basketball gyms, football fields and even swim meets, Janet loved seeing her grandchildren thrive in sports. Seeing them grow was one of her greatest joys in life. Later in life fun times were spent with her son’s and their children watching movies, cooking steaks, telling old stories, and enjoying each other’s company (possibly having a few glasses of wine along the way). Her company was always something that her family cherished. Janet Modglin’s sudden passing has left a great emptiness in the hearts of her family and friends. But their memory of her soft-spoken words of wisdom, caring soul, loving presence, and dedication to enlightening the lives of others will be remembered and those characteristics will endure the test of time. Relatives and friends are invited to attend the Graveside Service on Thursday, March 25, 2021 at 10:00 a.m. at St. Peter Cemetery, 1550 Hwy 44, Reserve, LA. Arrangements by Millet-Guidry Funeral Home. Please consider sharing your thoughts, favorite memory or condolences at www.milletguidry.com.

Janet Jane Modglin of Reserve, LA, passed away on Wednesday, March 17, 2021, at 77 years old. She was born on September 30, 1943, in Reserve, Louisiana. She is preceded in death by her parents, James and Regina Lasseigne. She is survived... View Obituary & Service Information

The family of Janet Jane Modglin created this Life Tributes page to make it easy to share your memories.

Janet Jane Modglin of Reserve, LA, passed away on Wednesday,...