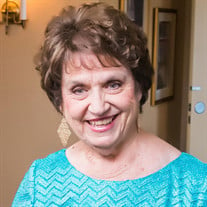 Janice Andre Hoover, born December 14, 1938, in Point Coupee, LA, and passed away peacefully, surrounded by her family, at her home in LaPlace at 2:22 p.m. on Saturday, October 27, 2018. She was 79 years old. She was preceded in death by her parents, Russell J. Andre, Sr. and Gracie Guerin Andre, her brother, Russell J. Andre, Jr., and grandson, Zachary Hoover. She is survived by her beloved husband of 61 years, Harry J. Hoover; her four children—Cherrie Hoover Broekhoven (spouse–Wayne), Timothy Hoover (spouse–Camilla), Steven Hoover (spouse—Lisa) and Michael Hoover (spouse—Leigh); her siblings, Donald Andre (spouse—Diana), Richard Andre, James Andre (spouse—Darlene) and Debbie Andre Fox (spouse—Jim). She also leaves unforgettable cherished memories, 10 grandchildren, 8 great grandchildren, cousins, nieces, nephews and her beloved dog, Logan. Janice and her family moved to Baton Rouge where she attended from Redemptorist High School. She married Harry on August 3, 1957, and moved with her husband and family to LaPlace in 1967. Janice, who loved to sing for weddings since she was in grammar school, joined the St. Joan of Arc Chancel Choir and remained a member for over 41 years. In 1971, she joined the Christmas Cantata of four LaPlace churches for the season. In 1987, she was selected for the Choir for Pope John’s Papal Visit in New Orleans, LA. She worked for Sears in both LaPlace and Clearview for 25 years. In her spare time, she joined the St. John Theatre. Some her favorite performances were Bloody Mary in South Pacific; Aunt Eller in Oklahoma; Golde in Fiddler on the Roof; and Lady Margaret in Camelot. Relatives and friends are invited to attend the visitation at St. Joan of Arc Catholic Church,529 West 5th Street, LaPlace, LA 70068 on Friday, November 2, 2018 from 10:00 a.m. to 12:00 noon followed by a Funeral Mass at 12:00 noon. Inurnment will be held at Roselawn Cemetery, 4045 North St., Baton Rouge, LA 70806 at a later date. In lieu of flowers, memorials preferred to St. Joan of Arc Catholic Church. Arrangements by Millet-Guidry Funeral Home.

Janice Andre Hoover, born December 14, 1938, in Point Coupee, LA, and passed away peacefully, surrounded by her family, at her home in LaPlace at 2:22 p.m. on Saturday, October 27, 2018. She was 79 years old. She was preceded in death by her... View Obituary & Service Information

The family of Janice Andre Hoover created this Life Tributes page to make it easy to share your memories.