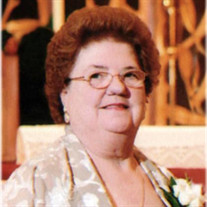 Jean Hymel Gendron, age 84, passed away on Tuesday, March 8, 2022. She was a native of Reserve, LA and a resident of LaPlace, LA. Jean graduated from Leon Godchaux High School in 1955. She began working with her father in his business, Hymel&#8217;s... View Obituary & Service Information

The family of Jean Hymel Gendron created this Life Tributes page to make it easy to share your memories.