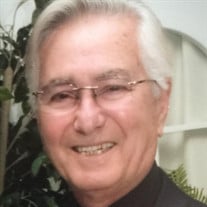 John Salvadore Grego, Jr., the superintendent of the Jefferson Parish Fire Department from 1969 to 1979, died Tuesday after a long struggle with Alzheimer's disease. He was 87. Grego also served as fire chief of NASA's Stennis Space Center in Bay St. Louis, MS from 1980 to 1990. Known as J.S., Grego was the beloved patriarch of a large extended family with deep roots in the New Orleans area. He will be sorely missed by six children and their spouses, 18 grandchildren and one great-grandchild. He and his wife, Aimee Cavalier Grego, would have celebrated 55 years of marriage in August. The fourth of seven children of the late John Salvadore Grego, Sr. and Rosalie Mancuso Grego, J.S. graduated from Warren Easton High School, where he played clarinet in the school band. His only surviving sibling is Dominick Joseph Mancuso of Picayune, Mississippi. Grego served his country, his community and his family throughout his life. In the Navy from 1948 until 1952, he helped commission the U.S.S. Pittsburgh at Bremerton, Washington and then sailed on several goodwill tours of the Mediterranean. He was active in the Knights of Columbus Marian Council 3118, the Louisiana State Fireman's Association, the Louisiana State Fire Chiefs Association, and the Southwestern and Southeastern Divisions of the International Association of Fire Chiefs. Grego died at home with his family around him, and he will be deeply mourned by many relatives, friends and colleagues. He was the center of a boisterous clan, always proud of his five sons and one daughter, and always ready to have fun with his grandchildren who range in age from 30 to 10. His youngest granddaughter, Isabella Ambeau,11, said, "What will we do without him? He was always the life of the party." "He was a delight," his wife, Aimee, said. "Laughter was always a part of our lives, from our first date. We could always laugh." His bereaved children are John S. Grego, III; Paul (Theresa) Grego; Jeannine Grego; Douglas (Karen) Grego; Edward (Angela) Grego; Philip Grego. Burial with military honors will occur on Friday, May 6, 2016 at Southeast Louisiana Veterans Cemetery in Slidell. A Memorial Mass will be held on Saturday, May 7, 2016 at noon at Our Lady of Divine Providence Catholic Church, 1000 N. Starrett Rd in Metairie. The family will receive relatives, friends and members of the Jefferson Parish Fire Department at the church beginning at 10:30 before the service, and a reception will follow it in the St. Lawrence room. In lieu of flowers, the family asks that you please consider a donation to the Alzheimer's Association or Wreaths Across America.

John Salvadore Grego, Jr., the superintendent of the Jefferson Parish Fire Department from 1969 to 1979, died Tuesday after a long struggle with Alzheimer's disease. He was 87. Grego also served as fire chief of NASA's Stennis Space Center... View Obituary & Service Information

The family of John Salvadore Grego, Jr. created this Life Tributes page to make it easy to share your memories.

John Salvadore Grego, Jr., the superintendent of the Jefferson...