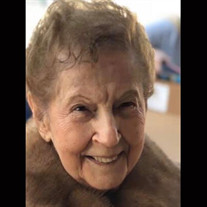 Josephine Petrolia Dufresne Paine passed away on Thursday, December 12, 2019 at the age of 89. She was born in New Orleans, former resident of Montz and Norco, and a resident of LaPlace for the past 15 years. Josephine was a past member of the Sacred Heart of Jesus Ladies Altar Society and a past member and treasurer of the Bonnet Carré Garden Club both in Norco. Beloved wife of the late Francis “F. E.” Dufresne, Jr. by first marriage and the late Roy L. Paine by second marriage. Loving mother of Tricia Dufresne Rome (Leo), Keith Dufresne (Jean), Sheryl Dufresne Gauthreaux (Wade), Emily Dufresne Voros (Rob) and the late Wayne Dufresne. Grandmother of Timothy (Quinn), Shane (Kelly), Aaron (Katie) and Jordan Banquer (Brooke), Amber Meades (Jim), Justin Dufresne (Laken), Abbie LeRouge (Jeff), Marci Gauthreaux, Brant Gauthreaux (Kelsey), Brianne Voros and Marissa Voros (Al). Great grandmother of 14 and one on the way. Also survived by her brother in law, Reed Perilloux, and a host of nieces and nephews. She was preceded in death by her parents, Emile and Mathilda Pizzolato Petrolia; sister, Madeline Perilloux; and great granddaughter, Francesca Banquer. The family would like to give a special thanks to her caregivers, Brenda Washington, Sonya Badon and Linell Hale. Josie was a dedicated mother first and foremost. She treasured her children and embraced every moment with them. She especially loved her role as Memmaw. She had a vivacious personality and became a friend to everyone she met. Relatives and friends are invited to attend the visitation at St. Joan of Arc Catholic Church, 529 W. 5th Street, LaPlace on Wednesday, December 18, 2019 from 10:00 a.m. until 1:00 p.m. followed by the Funeral Mass at 1:00 p.m. Interment in St. Peter Cemetery. In lieu of flowers, Masses preferred. Arrangements by Millet-Guidry Funeral Home. To share memories or condolences, please visit www.milletguidry.com

Josephine Petrolia Dufresne Paine passed away on Thursday, December 12, 2019 at the age of 89. She was born in New Orleans, former resident of Montz and Norco, and a resident of LaPlace for the past 15 years. Josephine was a past member of the... View Obituary & Service Information

The family of Josephine Petrolia Dufresne Paine created this Life Tributes page to make it easy to share your memories.