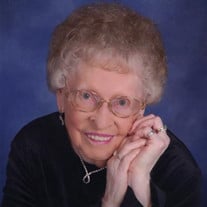 Margaret Aline Stirling Barrett, age 95, passed away on December 31, 2016, in her home in Metairie, Louisiana. Margaret was born on March 15, 1921, in East Feliciana Parish, Louisiana. She was the daughter of John M. Stirling and Aline Margaret Guttzeit Stirling. Margaret grew up in Baton Rouge, Louisiana, graduated from Baton Rouge High School in 1938, attended LSU and married Cam S. Barrett on August 20, 1942. They moved to LaPlace, Louisiana, in 1949 where they worked, played, volunteered, worshipped, and raised a family until Cam’s death in 2005. Margaret worked in LaPlace for Remy Gross, MD, for many years as bookkeeper and med tech. She was a lifetime member of the Methodist Church. Margaret donated much of her time to philanthropic causes. She was Past Grand Royal Matron Order of the Amaranth State of Louisana and a sixty-year member of the Order of the Eastern Star Grand Chapter of Louisiana. After moving to Metairie she joined the Wellness Center at EJGH. She was a constant sight in the mornings with her dedicated caregiver Debbie Trosclair, benefitting not only from the regular exercise but also from the strong friendships she developed with the other members. That morning routine became one of the highlights of her days. Margaret is survived by her sisters, Elizabeth (Betty) S. Johnson and Carol A. Stirling, both of Baton Rouge; her daughter and son-in-law Linda (Cindy) and Conrad Chapaton of St. Francisville; her son and daughter-in-law Dr. John and Rhonda Barrett of Metairie; four grandchildren; and three great-grandchildren. She is preceded in death by her husband, Cam S. Barrett, of LaPlace, Louisiana. A funeral is scheduled for 12:00 p.m. on Friday, January 6, 2017, at the First United Methodist Church in LaPlace, Louisiana, with visiting hours there from 10:00 a.m. to 12:00 p.m. Friday. Reverend Regina Hickman will officiate. A Graveside Service will be held at 2:30 p.m. in Roselawn Cemetery in Baton Rouge, Louisiana. All are welcome to attend and celebrate Margaret’s life. The family would like to thank her caregiver, Debbie Trosclair, for all that she has done for her over the past three years. There was always a special place in Margaret’s heart for Debbie, as her life was enriched daily by her presence. Flowers or donations may be sent to the church, (504) 559-1100.

Margaret Aline Stirling Barrett, age 95, passed away on December 31, 2016, in her home in Metairie, Louisiana. Margaret was born on March 15, 1921, in East Feliciana Parish, Louisiana. She was the daughter of John M. Stirling and Aline Margaret... View Obituary & Service Information

The family of Margaret Aline Stirling Barrett created this Life Tributes page to make it easy to share your memories.