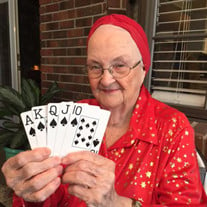 Margie Christine ‘Chris’ Mc Duffie, age 87, passed from this earth to God’s Heavenly Home on Saturday, December 26, 2015. Beloved wife of the late Lonnie T. Mc Duffie for 55 years. She was preceded in death by her parents, Martha Jones and Dewey Jones; her brother, Dewey ‘Bud’ Jones, Jr.; and her sister, Vera Wilson. Mother of Jerry, Terry, and Richard Mc Duffie and Diane Reed. Grandmother of Matt, Rusty, Troy, Chris, Scott, Travis and Shannon and step grandmother of Travis, Christy, Kathy, Tommy and Annette. Great grandmother of Ashley, Dalton, Austin, Kati, Karson, Tyler and step great grandmother of Josh. Great-great grandmother of Link. She was born January 14, 1928 in DeQueen, AR. She married and became a career military housewife raising four children. After her husbands service career she became a resident of Louisiana in 1957 until her death. She lived in Destrehan for several years before becoming a resident of LaPlace for the past 42 years. She and Lonnie enjoyed traveling in there motor home around the U.S. and Canada. Her greatest pleasure was playing bingo and best of all weekly poker game with family and friends. She loved to crochet and give out pieces for gifts. It is with great sorrow that we see her depart this earth, but we will celebrate her life knowing God has a better place for us all. Relatives and friends are invited to attend the Visitation at Millet-Guidry Funeral Home, 2806 W. Airline Hwy., LaPlace on Thursday, December 31, 2015 from 9:00 a.m. to 12:00 p.m. with the Funeral Service beginning at 12:00 p.m. Interment in St. John Memorial Gardens Cemetery, LaPlace.

The family of Margie Christine 'Chris' Mc Duffie created this Life Tributes page to make it easy to share your memories.