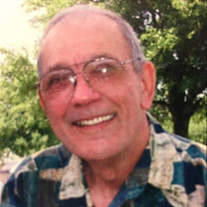 Mark Owen Falgoust, 80, of Norco, LA passed away peacefully on Thursday May 3rd, 2018 at East Jefferson General Hospital. Mark and his loving sister Barbara were born in Reserve, LA to Nash and Leone Falgoust. Mark was a stand-out athlete at Reserve High School where he played baseball, basketball and was an all-District selection and Team Captain of the football team his senior year. In his last year of high school, Mark and Janet Perilloux were honored by being chosen Homecoming King and Queen. Upon graduation, his stated goal was to become “President of the United States!” Although he never reached that lofty expectation, what followed in the next sixty plus years was far more fulfilling. Shortly after high school, Mark began working fulltime for American Cyanamid and married Janet. They were blessed to give birth to two healthy boys- Barry and Scott Falgoust. It was during this time that he developed some of his lifelong passions: LSU football, golf and carpentry. For a short period of time in the late 1970’s, he owned a construction company. Several of the structures that he built are still standing in the River Parishes today. (A true testament to the man’s creativity long after he is gone!) It was during the 1970’s that Mark married his second wife Nancy, and they gave birth to his youngest son, Paul Falgoust. As he transitioned from the contracting business to Purchasing Manager for Cytec Industries in the latter part of his work career, Mark discovered what would give him his greatest joy in life-his grandchildren and great grandchildren. “Pops”, as he was called by his grandchildren, always spoke of them with great pride in their accomplishments and loved seeing all of them during the holidays and at birthday parties. While he often lamented the fading of his Elvis-like good looks (and his hairline!), the thought of his grandchildren always put a smile on his face! As he settled into his twilight years, we would often share a bourbon while watching an LSU football game and he would reminisce about his life and his family. He always hoped that we knew how much he loved and cared for all of us and that we not worry about him because he had a good, full life. Yes, “Pops”, you sure did have a good life! We will always love and remember you! Mark is pre-deceased by his parents Nash and Leone Falgoust. He will forever be remembered by his sister Barbara, his children Barry (Judy), Scott (Lana) and Paul (Linda), by his grandchildren Lesley (Robert), Brett (Alexis), Lindsey (Blake), Michelle and Chris and by his great-grandchildren Averie and Lily. He will be fondly remembered by many nieces, nephews and cousins as well. And of course, his beloved dog, “Rooster”, will always miss his master. Please join us in honoring the memory of Mark on Saturday May 19th at Millet-Guidry Funeral Home where a memorial service will be held from 9-11 am. Millet-Guidry Funeral Home is located at 2806 West Airline Highway, LaPlace, LA 70068. Tel: (985)-536-7700 Flowers are always welcome, but if you would really like to honor the memory of Mark Falgoust, please consider making a donation to the Kidney Cancer Association at www.kidneycancer.org

Mark Owen Falgoust, 80, of Norco, LA passed away peacefully on Thursday May 3rd, 2018 at East Jefferson General Hospital. Mark and his loving sister Barbara were born in Reserve, LA to Nash and Leone Falgoust. Mark was a stand-out athlete... View Obituary & Service Information

The family of Mark Owen Falgoust created this Life Tributes page to make it easy to share your memories.

Mark Owen Falgoust, 80, of Norco, LA passed away peacefully on...