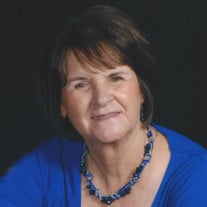 Patricia Ann Vicknair passed away on Monday, July 11,2016 at the age of 69 in LaPlace, LA. A native of Reserve, LA and a Hammond resident for past 13 years. She was a member of Oak Tree Church in Hammond, LA. Beloved wife of Oliver J. Vicknair,... View Obituary & Service Information

The family of Patricia Ann Vicknair created this Life Tributes page to make it easy to share your memories.