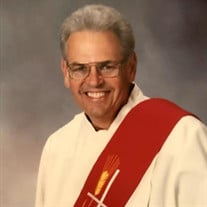 Deacon Paul Anthony Cimino, a gentleman and a scholar who was always sharply dressed, passed away on July 26, 2021, at his home in LaPlace. He was 81. Paul was born on January 30, 1940, in New Orleans. He was a loving husband, father or “Pop” as he was affectionately known, and Paw Paw. He grew up in Old Metairie and graduated from Cor Jesu High School. He then attended LSUNO where he was introduced to the love of his life, Judy, on a blind date. They were married on April 20, 1963 at St. Dominic Catholic Church. After attending LSUNO, Paul laid the foundation for a successful career in the floor covering industry joining his father at Cut-Rate Carpet and Linoleum. While at Cut-Rate, he also imported and sold Carnival throws. Paul's Catholic faith guided him throughout his life, and he truly lived out his faith. In 1991, Paul closed Cut-Rate to spend more time with his family and prepare to enter the Deaconate. While studying to become a Deacon, he worked at Georgia Carpet Outlet and was an award winning salesman with sales totaling over $7,000,000. He completed his deaconate studies and was ordained a permanent deacon in 1993. One of his greatest joys and gifts was ministering to those in need. Paul exemplified preaching the gospel without using words. He cherished officiating at the baptisms, weddings and other special religious events of his family, friends and parishioners. Paul was a member of the Open Door prayer group for over 30 years and was a charter member of the Monday Night Disciples. He was also a member of the Knights of Columbus, earning the rank of fourth degree knight. Paul always had a smile on his face and never met a stranger much to his wife and children’s dismay. An avid runner, he volunteered with the Crescent City Classic Road race in its early years. When he was no longer able to run, Paul took long walks with his beloved dog, Gumbo. His hobbies included reading, playing cards, and completing crossword puzzles in pen. He also enjoyed a good glass of wine and a fine cigar. Paul was preceded in death by his parents, Salvatore Anthony Cimino and Elmer Hart Cimino; father-in-law, Anthony John Scorsone; mother-in-law, Elma Pons Scorsone DiTrapani and brother-in-law, Frances Jerome Scorsone. Paul is survived by a brother, Sammy J. Cimino and a sister, Susie Cimino Glowacki. He also leaves behind his wife and best friend of 58 years, Judy Scorsone Cimino; his three children Donald (Rosalyn), Paula (Haggai), and Anthony (Michele); his grandchildren Haggai III, Noah, Paul Allen, Kyle, and Morgan; brother-in-law Michael (Carol) and nephews, Michael (Jennifer) and Jeffrey. Relatives and friends are invited to attend the Visitation and Funeral Mass at St. Joan of Arc Catholic Church, 529 W. 5th St., LaPlace on Thursday, July 29, 2021. Visitation will begin at the church at 10:00 a.m. followed by a Funeral Mass at 11:00 a.m. Interment in Greenwood Cemetery, New Orleans. In lieu of flowers, donations in Paul's memory may be made to the Monday Night Disciples “All God’s Children” ministry c/o Don Sampey 4705 Lake Como Avenue, Metairie, LA 7006, Catholic Charities of the Diocese of Baton Rouge Maternity and Adoption Program, 1900 S. Acadian Thruway, Baton Rouge, LA, 70808 or the charity of your choice. Arrangements by Millet-Guidry Funeral Home. To share memories or condolences, please visit www.milletguidry.com

The family of Deacon Paul Anthony Cimino created this Life Tributes page to make it easy to share your memories.

Deacon Paul Anthony Cimino, a gentleman and a scholar who was...