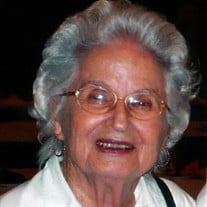 Rosemary Borne Elfer was born December 8, 1924 and died March 14, 2022 at 10:45 a.m. She became a resident of LaPlace, LA in 1955. She was the widow of Charles M. Elfer, Sr. and the daughter of Edwin J. Borne, Sr. and Corrinne Thibodaux Borne. In addition to her husband and parents, she is preceded in death by her sister, Marcia Borne Miranda, and brothers, Edwin J. Borne, Jr. and Claiborne Borne. She is survived by her children, Mitchel Elfer, Rene Elfer, Roslyn Elfer, Charles M. Elfer, Jr. (Jacquelyn); two grandchildren, Gale Weber and Andre Elfer; and five great-grandchildren, Savanah Elfer, Dawson Elfer, Jacob Elfer, Charlotte Weber and Gavin Weber. She graduated from Sophie B. Wright in New Orleans. During World War II, Rosemary was a riveter, in which she helped to build ships, at Higgins Aircraft. She joined the Woman’s Army Corps (WAC) in December 1944, serving as a Sergeant Postal Non-commissioned Officer at Ft. Lerius in Washington State. She was an advocate of stray animals and a parishioner of St. Joan of Arc Catholic Church. She was a member of the Ladies Altar Society and the St. Joan of Arc Thrift Shop. She belonged to the American Legion Post 383 in LaPlace and the Louisiana Women Veterans. The family would like to thank St. Catherine’s Hospice for Rosemary’s end of life care. Family and friends are invited to attend the Visitation and Funeral Mass at St. Joan of Arc Catholic Church, 529 W. 5th St., LaPlace on Friday, March 18, 2022. Visitation at the church will be held from 10:00 a.m. to noon followed by a Funeral Mass at noon. Interment at St. John Memorial Gardens Cemetery, LaPlace. In lieu of flowers, the family requests that donations be made to the American Legion Post 383 in LaPlace or to your local Humane Society in honor of Rosemary. Arrangements are being handled by Millet Guidry Funeral Home. To share memories or condolences, please visit www.milletguidry.com.

The family of Rosemary Borne Elfer created this Life Tributes page to make it easy to share your memories.