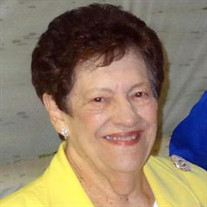 Sylvia Audiffred Perque passed away on Sunday, December 25, 2016 at the age of 81. She was a native of New Orleans and a resident of Reserve. Beloved wife of the late Earl J. Perque, Sr. Loving mother of Earl J. Perque, Jr. (Gloriann), Greta P. Ansardi (Bernard), Paula Perque and Paul Perque (Shelly). Grandmother of Jonathan Perque, Ashly and Brandon Ansardi and Layla Enayati. Great grandmother of Jaelynn Ansardi. Daughter of the late Amanda Hotard Audiffred and Leo “Blackie” Audiffred. Sister of Diane Butler (the late John) and Regina Remondet (Joseph). Sylvia was a 1953 graduate of Leon Godchaux High School. She was employed and retired from Atmos Gas Company (formerly Reserve Gas Company). Sylvia spent her life serving her family and friends of St. Peter’s Catholic Church in Reserve, La. For over thirty years, she attended daily morning mass and took pride in caring for the church’s altar linens. She was a member of the Knights of Columbus Auxiliary, Catholic Daughters, and president of the St. Peter’s Ladies Altar Society for over 40 years. In 1988 she received the Archdiocese of New Orleans St. Louis Medallion that honors distinguished service to the Catholic community. In 2010, Sylvia was the recipient of the Distinguished Graduate Award for St. Peter’s Parochial School. Sylvia loved baking and many in St. John Parish would say she was the best around. Her coconut cake won many baking contests, her delicious eggnog excited many during the holiday season, and all who knew her desired her fudge and praline recipes. She attributed her excellent baking and cooking skills to her grandmother Regina, “Mom”, Hotard. Even with her busy schedule, Sylvia still found time for her card parties, being with her many friends, and keeping up with the local news. Sylvia Perque will never be forgotten. The family would like to thank all family and friends who helped during her recent illness. In addition we would like to acknowledge Lori and Jamie Remondet who cared for Sylvia during her final days with us. Relatives and friends are invited to attend the Funeral Mass at St. Peter Catholic Church, 1550 Hwy 44, Reserve on Wednesday, December 28, 2016 at 12:00 p.m. Visitation at the church from 9:00 a.m. to 12:00 p.m. Interment in St. Peter Cemetery. In lieu of flowers, donations preferred to the American Cancer Society, 2605 River Rd., New Orleans, LA 70121.

Sylvia Audiffred Perque passed away on Sunday, December 25, 2016 at the age of 81. She was a native of New Orleans and a resident of Reserve. Beloved wife of the late Earl J. Perque, Sr. Loving mother of Earl J. Perque, Jr. (Gloriann), Greta... View Obituary & Service Information

The family of Sylvia Audiffred Perque created this Life Tributes page to make it easy to share your memories.